COVID-19: EpicTV Shop is operating as usual online, with precautionary measures to ensure staff and customers are safe. 🤘MORE
12822
Furia Climbing Shoe
Scarpa
The Furia is the most sensitive climbing shoe Scarpa have ever made, designed for fierce and intense bouldering of the lowest (angled) order. The Scarpa Furia... Show more >
USD
179.95
$179.95
Buy now and get
$9.00 worth of credit back
Price excludes VAT for deliveries outside the EU
Sorry, this product is discontinued. 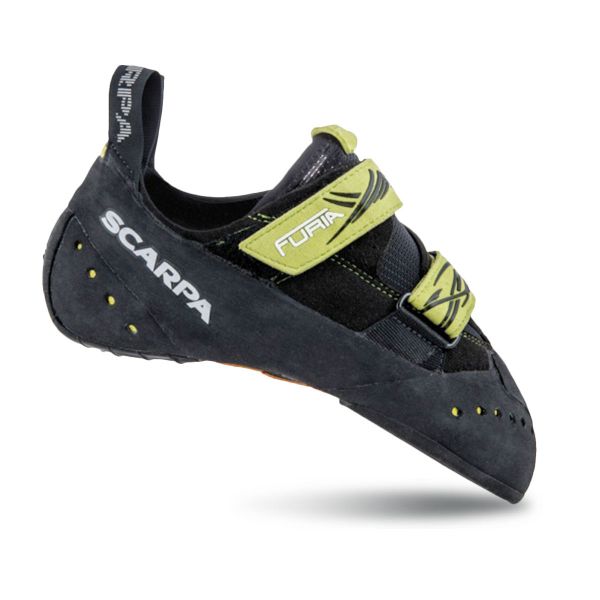 The Furia is the most sensitive climbing shoe Scarpa have ever made, designed for fierce and intense bouldering of the lowest (angled) order.

The Scarpa Furia uses no midsole between your foot and the ultra-thin 3mm rubber, providing you with an almost barefoot level of sensitivity that enables you to detect and push off every micro-nubbin and nigh-invisible feature on the rock - ideal for any type of overhanging climbing with minuscule footholds. Vibram XS Grip2 rubber applies maximum friction to the rock surface to relieve body tension during upside-down manoeuvres, and the Power-Connection-Band, which replaces the midsole, doesn't decrease flex, but it does link the toe box and heel cup to increase standing and pushing-strength on micro edges. The highly-asymmetric pointed toe hooks into pockets with ease, and the heel has been given a "fin" that locks the shoe into place during heel hooks and heel blocks. This shoe is not for the beginner; only for the most furious climbers amongst you.

The Scarpa Furia uses a synthetic upper that will break-in over time but will not stretch, meaning it will maintain the same out-of-the-box performance over its entire lifespan. Being a high-performance shoe, the Furia is designed to fit snugly.

I'm usually a rigid shoe person: I've been using Miuras VS as go-to shoes for the past 7 years and thought I would never find equally perfect shoes. I decided to try something completely different and see if it would change my climbing style and OH BOY was it a good decision! While I still won't taking the furias on slabby edgy climbs (my claves would make me regret it halfway through the route), they quite literally excel at everything else. I'm actually worried my footwork might suffer from it because they just stick to anything without having to be accurate and I find myself forgetting to look down at my feet half the time. I'm yet to have a foot slip. I got the recommended size (1.5 size above my miuras, anxiety through the roof fully expecting clown sizes shoes to arrive in the post) and the fit was actually perfect straight out of the box! I could directly wear them for entire sessions without abnormal discomfort or hot spots. The toebox and heel fit fantastically well for me. The only downside is the upper velcro that's too high on the foot and hurts when my foot isn't extended, i.e. most of the time. When that's the case I normally just cross the upper and lower velcros to leave some more space near the ankle but it is not possible with the furias since the velcro attachments are on opposite sides and it just makes a wide flimsy diagonal. So I have to loosen the upper velcro and risk having the shoe move when heel hooking. I can't say anything about their durability yet but will edit the review if it turns out to be poor. If this is still the last sentence when you read the review, consider them durable!

Unfortunately, the size was not found first. The size is smaller than the size of the street shoe. Very well fitting shoes. It adheres to both room and rock. I recommend!

I bought these for a trip to Font. I was super impressed by the softness and feel. And really hoped that they would improve my footwork in font.
I bought these in size 43, to compare with Scarpa Instinct also 43 and Scarpa vapor 43½. I thought they would stretch quite a bit due to the softness of the shoe but they did not. If I buy them again I might go for 43½ since i got some abrasions on my knuckles.
It might be that I am not good enough climber for these really soft shoes but I think the instinct preformed better, on edging, toe and heel hocking. They are a bit to downturned for smearing and on granite it feels like the rubber wont hold for my body weight (75kg).

Conclusion. Sensitive shoes that makes you feel what you stand on but did not make me climb better.

Just got my new Furia Climbing Shoe. Delivery was super fast and the shoe it self is amazing. Does really great job in the bouldering gym. The rubber has lots of grip and the narrow tip allows very precise moves. Specially greatn also for a firm heel hook move. Love them!!

Guetld
my sending pair of shoes

While looking for the perfect bouldering and steep climbing shoe one cannot get past the Scarpa Furia as it offers the new foot wrapping system which gives edging power and perfect sensibility. The heel has rubber all around it so it won't stretch,
this has the benefit of more secure heelhooks. The toe area is wrapped with the extra sticky T45 rubber, a rubber I really like as it makes some moves considerably more easy with its perfect grip. I compared these directly with other high quality shoes and
for me the fit is perfect here and all around this shoe is my favourite. Scarpa Drago might be a little bit better for toe hooking but for heel hooking the Furia is best. All in all I am very happy with the innovation Scarpa has done with their new shoes and can highly recommend it this shoe as well as other Scarpa shoes.

i like this shoe, have a beatiful tip! and is very very soft

bought in size 40; i wear vapours in 41 and have a little space in the toe, however with the curia no space was left. Horrifically uncomfortable open first session, managed to wear the show in after 4 sessions and heating the shoe her the kettle. I would advise not to downsize with this shoe.
The rubber is very soft leading to good sensitivity and the toe rubber makes toe hooks great, the heal is weird but successful as with all combing shoes. The softness and thinness of the rubber is slightly worrying as i am concerned how long the show all last.
Overall this shoe is very technical soft and precise. and has positive aesthetics.